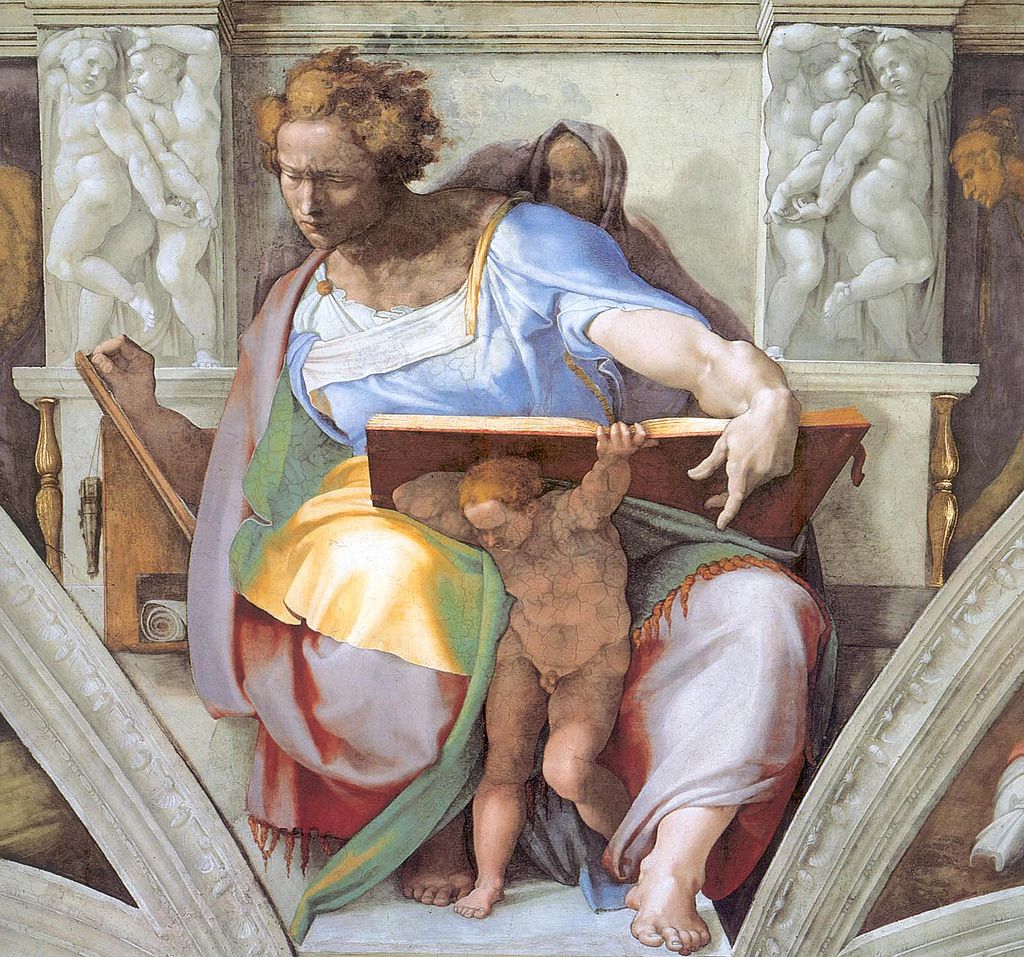 According to the theory of the art historian Marcia B. Hall, which has gained considerable acceptance, cangiante is one of four modes of painting colours available to Italian High Renaissance painters, along with sfumato, chiaroscuro and unione.[3] The word itself derives from the Italian cangiare (“to change”).

Cangiante is characterized by a change in color necessitated by an original color’s darkness or lightness limitation. For example, when painting shadows on a yellow object, the artist may use a red color simply because the yellow paint cannot be made dark enough. There are other methods of rendering shadows or highlights (for example, mixing the original hue with black or brown), but these can render the shadow color dull and impure. During the Renaissance, the variety and availability of paint colors were severely limited.
An early example of cangiante by Giotto from the Arena Chapel. Note the shift in color on the robes.

The greatest practitioner of the cangiante technique was Michelangelo,[4] especially in many parts of the Sistine Chapel ceiling. For example, in the image of the prophet Daniel, a transition from green to yellow is evident in the subject’s robes. After Michelangelo’s time, the technique found widespread acceptance and is now a standard painting technique.

Sfumato (Italian: [sfuˈmaːto], English: /sfuːˈmɑːtoʊ/) is a painting technique for softening the transition between colours, mimicking an area beyond what the human eye is focusing on, or the out-of-focus plane. Leonardo da Vinci was the most prominent practitioner of sfumato, based on his research in optics and human vision, and his experimentation with the camera obscura. He used it in many works, including the Virgin of the Rocks and in his famous painting of the Mona Lisa. He described sfumato as “without lines or borders, in the manner of smoke or beyond the focus plane”.

According to the theory of the art historian Marcia B. Hall, which has gained considerable acceptance,[3] sfumato is one of four modes of painting colours available to Italian High Renaissance painters, along with cangiante, chiaroscuro and unione.
Source: Sfumato – Wikipedia

The Vitruvian Man (Italian: Le proporzioni del corpo umano secondo Vitruvio, which is translated to “The proportions of the human body according to Vitruvius”), or simply L’Uomo Vitruviano (Italian pronunciation: [ˈlwɔːmo vitruˈvjaːno]), is a drawing made by the Italian polymath Leonardo da Vinci around 1490. It is accompanied by notes based on the work of the architect Vitruvius. The drawing, which is in ink on paper, depicts a man in two superimposed positions with his arms and legs apart and inscribed in a circle and square. The drawing and text are sometimes called the Canon of Proportions or, less often, Proportions of Man. It is kept in the Gabinetto dei disegni e stampe of the Gallerie dell’Accademia, in Venice, Italy, under reference 228. Like most works on paper, it is displayed to the public only occasionally, so it is not part of the normal exhibition of the museum.

The drawing is based on the correlations of ideal human body proportions with geometry described by the ancient Roman architect Vitruvius in Book III of his treatise De architectura. Vitruvius described the human figure as being the principal source of proportion among the classical orders of architecture. Vitruvius determined that the ideal body should be eight heads high. Leonardo’s drawing is traditionally named in honor of the architect.

Marcus Vitruvius Pollio (/vɪˈtruːviəs ˈpɒlioʊ/; c. 80–70 BC – after c. 15 BC), commonly known as Vitruvius, was a Roman author, architect, civil engineer and military engineer during the 1st century BC, known for his multi-volume work entitled De architectura. His discussion of perfect proportion in architecture and the human body led to the famous Renaissance drawing by Leonardo da Vinci of Vitruvian Man.

By his own description[2] Vitruvius served as an artilleryman, the third class of arms in the military offices. He probably served as a senior officer of artillery in charge of doctores ballistarum (artillery experts) and libratores who actually operated the machines.