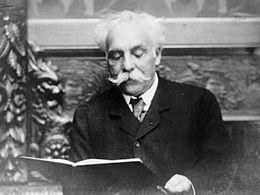 As the only son of a prosperous manufacturer, Poulenc was expected to follow his father into the family firm, and he was not allowed to enrol at a music college. Largely self-educated musically, he studied with the pianist Ricardo Viñes, who became his mentor after the composer’s parents died. Poulenc also made the acquaintance of Erik Satie, under whose tutelage he became one of a group of young composers known collectively as Les Six. In his early works Poulenc became known for his high spirits and irreverence. During the 1930s a much more serious side to his nature emerged, particularly in the religious music he composed from 1936 onwards, which he alternated with his more light-hearted works.

In addition to his work as a composer, Poulenc was an accomplished pianist. He was particularly celebrated for his performing partnerships with the baritone Pierre Bernac (who also advised him in vocal writing) and the soprano Denise Duval. He toured in Europe and America with both of them, and made a number of recordings as a pianist. He was among the first composers to see the importance of the gramophone, and he recorded extensively from 1928 onwards.

In his later years, and for decades after his death, Poulenc had a reputation, particularly in his native country, as a humorous, lightweight composer, and his religious music was often overlooked. In the 21st century, more attention has been given to his serious works, with many new productions of Dialogues des Carmélites and La voix humaine worldwide, and numerous live and recorded performances of his songs and choral music.

Kaiser-Walzer, Op. 437 (Emperor Waltz) is a waltz composed by Johann Strauss II in 1889. The waltz was originally titled Hand in Hand and was intended as a toast made in August of that year by Emperor of Austria Franz Joseph I on the occasion of his visit to the German Emperor Wilhelm II where it was symbolic as a ‘toast of friendship’ extended by Austria-Hungary to the German Empire.

Strauss’ publisher, Fritz Simrock, suggested the title Kaiser-Walzer since the title could allude to either monarch, and thus satisfy the vanity of both rulers. The waltz was first performed in Berlin on 21 October 1889. The original cover of the piano edition bore the illustration of the Austrian Imperial Crown.

Kosma was born József Kozma in Budapest, where his parents taught stenography and typing. He had a brother, Ákos. A maternal relative was the photographer László Moholy-Nagy, and another was the conductor Georg Solti. He started to play the piano at age five, and later took piano lessons. At the age of 11, he wrote his first opera, Christmas in the Trenches. After completing his education at the Gymnasium Franz-Josef, he attended the Academy of Music in Budapest, where he studied with Leo Weiner. He also studied with Béla Bartók at the Liszt Academy, receiving diplomas in composition and conducting. He won a grant to study in Berlin in 1928, where he met Lilli Apel, another musician, whom he later married. Kosma also met and studied with Hanns Eislerin Berlin. He became acquainted with Bertolt Brecht and Helene Weigel.

Kosma and his wife emigrated to Paris in 1933. Eventually, he met Jacques Prévert, who introduced him to Jean Renoir. During the 1930s Kosma teamed up with Prévert to set a number of Prévert’s poems to music, and have them recorded by popular singers. Several of these were hits. Kosma also composed scores to Renoir’s films including La Grande Illusion (1937), La Bête Humaine (The Human Beast, 1938), and La Règle du jeu (The Rules of the Game, 1939).

During World War II and the Occupation of France, Kosma was placed under house arrest in the Alpes-Maritimes region and was banned from composition. However, Prévert managed to arrange for Kosma to contribute music for films with other composers fronting for him. Under this arrangement, he wrote the “pantomime” of the music for Les Enfants du Paradis (1945), made under the occupation but released after the liberation. Among his other credits are the scores to Voyage Surprise (1946) and Le Testament du docteur Cordelier (The Doctor’s Horrible Experiment, 1959), the last of which was made for television. He was also known for writing the standard classical-jazz piece “Les feuilles mortes” (“Autumn Leaves“), with French lyrics by Prévert and later English lyrics by Johnny Mercer, which was derived from music in Marcel Carné‘s film Les Portes de la Nuit (1946). The song was featured in the eponymous 1956 film starring Joan Crawford.